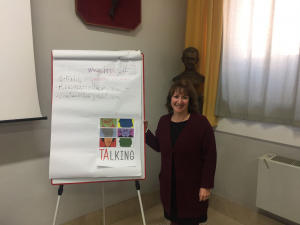 On November 27 we attended in Rome the 5th Conference of the Regions Section Lazio-Umbria-Marche association CNCP (Counsellor Professionals National Coordination).
It was a valuable opportunity to raise awareness of the project talking to people involved in counseling and in the educational sector in a wide variety of social contexts. They were recorded at 120 Congress people.
We were, therefore, in front of people who are particularly sensitive and interested in the issues of integration and training of adults.
As evidence of this, the ‘hot’ atmosphere and the curiosity that sparked Talking with questions and requests for staying in touch with us by many.
Thanks to all and especially to Sandra Maffei, Coordinator of the Regional Committee, for hosting us!
Silvia and Mariella (Ifrep 93)